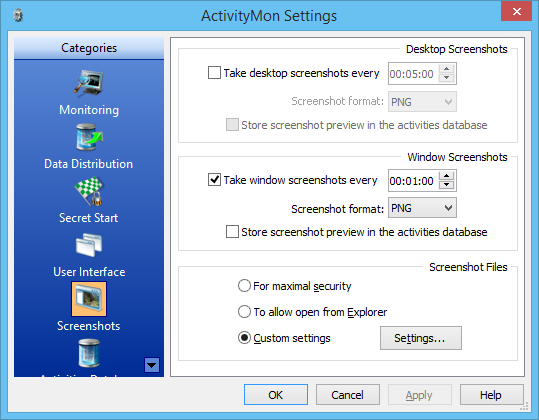 If you want to take screenshots of the whole user desktop check the Take desktop screenshots every. box

To take screenshots of the active window check the Take window screenshots every box. For each screenshots type can be set the delay between the taken screenshots.

For each screenshot type its image format can be set. To specify image format use the Screenshot Format: combobox. Its list contains all the supported image formats, to change screenshot format simply select its name from the list.

Check the Store screenshot preview in the data file box to inform application you wish to generate small preview image up to 150x150 pixels and to store it directly in the activities data file (files with the actmon extension). ActivityMon up to 1.2 version generated such a preview automatically, starting with the 1.3 version is this feature disabled by default. Screenshots previews generation can increase speed of viewing screenshots in the Activities Viewer but it slows down data file parsing and increases the size of activities data files.

Latest version of our parental control can be used just for 110CZK per month!

04/21/2022 ActivityMon Workstation/(Terminal) Server and Network update with Microsoft® Windows® 11 support is available in the Downloads section.

02/22/2021 ActivityMon Parental Control update with improved support for Google Chrome is available in the Downloads section.

01/26/2021 ActivityMon Workstation/(Terminal) Server and Network update with improved support for Google Chrome a Opera browsers is available in the Downloads section.